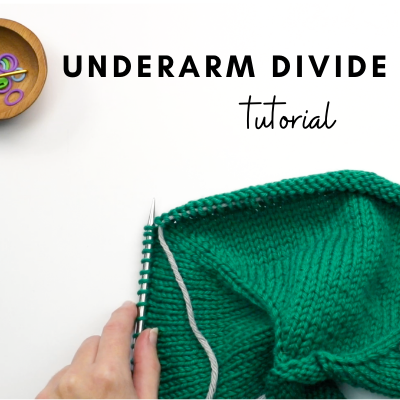 Because so many of my patterns are top-down raglans, I thought it would be beneficial to do a step-by-step tutorial for how to do the underarm divide. The underarm divide occurs when you have completed the raglan increases and it’s time to separate the sleeves and join the back and front pieces of the garment together. It can seem confusing the first time you do it, so hopefully the photo instructions below will help.

Additionally, I have updated this blog post in 2020 to include a video! Below is a video tutorial of working the underarm divide in my Audrey’s Cardigan pattern. Although my instructions are specific to this cardigan, the techniques I use are relevant to any other top-down raglan pattern:

Using my pattern “Crocus” as an example, let’s go step by step through the “Underarm Divide Row” section:

So the first step is to knit as described to marker, then simply remove the marker knit 2, and then remove the next marker. I then put the work down, find some misc. scrap yarn and cut a piece around 20″ length. I thread it through a tapestry needle. Picking the work back up, I transfer each sleeve stitch (the series of stitches that are before the next marker) onto the scrap yarn. See pictures below:

This next picture shows what it looks like when step 1 is complete and all sleeve stitches have been transferred to the piece of scrap yarn:

2) Direction: …turn work over & using the knitted cast-on method, CO 6 (8, 14, 18, 24) sts…
Step 2 is where it gets just a little tricky. Once the sleeve stitches are separated from the body (by putting the stitches on scrap yarn), a lot of top-down raglan patterns (including this one) instruct you to cast-on some underarm stitches. There are a couple of reasons for this:

When the directions say to “turn work over”,  you do just that – turn it so the WS is facing you and the needle with the working yarn that was in your right hand will now be in your left hand. Some patterns may say “flip work” at this step instead of “turn work over” – it means the same thing.

Once all the stitches are cast on, here is what it will look like:

In the above picture, I had just removed the first “next marker” and am about to “k2”, making sure I’m giving the first stitch a tug. This is the point where are you joining the back and front piece of the sweater together. Don’t worry if there seems to be a little hole or looseness at this point. When you are finished and weaving in ends you can easily tighten up any holes that may appear at the underarm

Once this step is done, you’re done! Well, at least with the first underarm. You’ll have to repeat one more time on the other side. The below picture shows what it looks like when one underarm divide has been completed for one sleeve:

Once the underarm divide row is complete you can actually try the sweater on. I’d recommend knitting a few rows after the underarm divide before you do this, just to give those cast on underarm stitches some stability. The best way to do this is to transfer all of the stitches onto a really long piece of scrap yarn. Yes, it’s kind of tedious, but it will give you a really good idea about how the yoke of the sweater will fit you. If you are not happy with how it’s fitting in the armholes you can make some adjustments:

If the armhole is too short (i.e, too tight), you can rip out the underarm divide row and work a couple more rows before you work the underarm divide. If you are okay with the body width and it’s just the length you need, then don’t work any raglan increases.

If you ever need help on figuring out how to adjust a raglan to fit you best, feel free to shoot me an email.
I hope this tutorial helped!

Note: need help working the sleeves? Check out part 2 of this post!

21 Comments for “The Great Underarm Divide…”